The Milky Way from San Pedro de Atacama in August

Why publish an image taken in August only in October ?...

Because I didn't have the time to finish it sooner.... The images were taken during several nights during the new moon of August. Then vacations in California en September, then a lot of other things to do.

The images have been made with a QSI583 CCD camera and an 8mm Sigma F/3.5 on piggyback on my C14. Thanks to Leslie Nagy for loaning me this lens.

The images were made one filter per night (BGRHalpha) meaning at least 7 nights because Halpha was done on several nights, then one night, I goofed on focusing, then calibrations etc... I tried doing two filters per night, but it turned out that the horizon was intruding in the images, only a few hours at the beginning of the night were useable. I was preparing the shooting at the very beginning of the night before my tours, and would park everything after the tours. Acquisition and preprocessing were done using PRISM.

I encountered several problems : First the optical quality of the lens in the blue is quite poor and would give halos around the other images and coma in the edges. I didn't use them in the final image. I tried several mixes between the red and Halpha image, and it didn't give satisfying results. I tried doing LRGB, and nothing pleased me really. In all truth I hate this type of image processing, where you spent hours in front of the screen, trying "things", and you go to bed with eyes like this. I tried several types of masks, and never resolved the problems of gradients. I had one side of the image with a green background (maybe the real color of the sky, meaning... red) and the other with a bluer background because of the zodiacal light. The truth is that this gradient is real, the zodiacal light is there, but it was making the image very hard to "read". The expert eyes :) will see (around 4 o clock) a darker zone, which is the trace left by our internet antenna. We tried to remove it as much as possible, but it is still there...

I finally opted for a GRHalpha image (G for the blue layer, R for the green, Halpha for the red). The color balance is not that ridiculous, while not true, still it is a lot more natural than any "horrible space telescope" type pallet, and shows what I wanted to show on the images, meaning the distribution of the HII regions in the Milky Way.

The first surprise in the image is the presence of Sharpless 17 which is the big red spot above the milky way, As the first image appeared on the screen, I believed I had some kind of reflection somewhere. Then I checked on internet for zeta Ophiuchus and found it was a real nebula. To be photographed again in detail next year. The other thing I had never realized was that the main HII regions of the milky way were not in a straight line in the plane of the milky way, but distributed along a very inclined S. Perspective effect ? I tried on the final image to show the dark zones outside of the Milky Way. I liked the zones of dark nebulae above the plane in the region of the southern cross, seen as if we were (in fact we are) above the plane of the Milky Way. Ignacio has produced a more contrasty picture (see the link below) which shows fields of galactic cirruses well away from the plane. More to study here.

This being said, I only worked in PRISM, still being refractory to Photoshop, eventhough I have the DVD of Adobe Premiere ready to install here. I was sweating and getting nowhere, and talked about it with Ignacio de la Cueva, who is an expert in the domain, and who gently proposed to process correctly this image, and I thank him for having transformed my image into something "showable".

Ignacio de la Cueva has placed more images (including larger format) of this image on his site. I can only recommend you take a look at it.

Here is one of the Ignacio with enhanced contrast images: 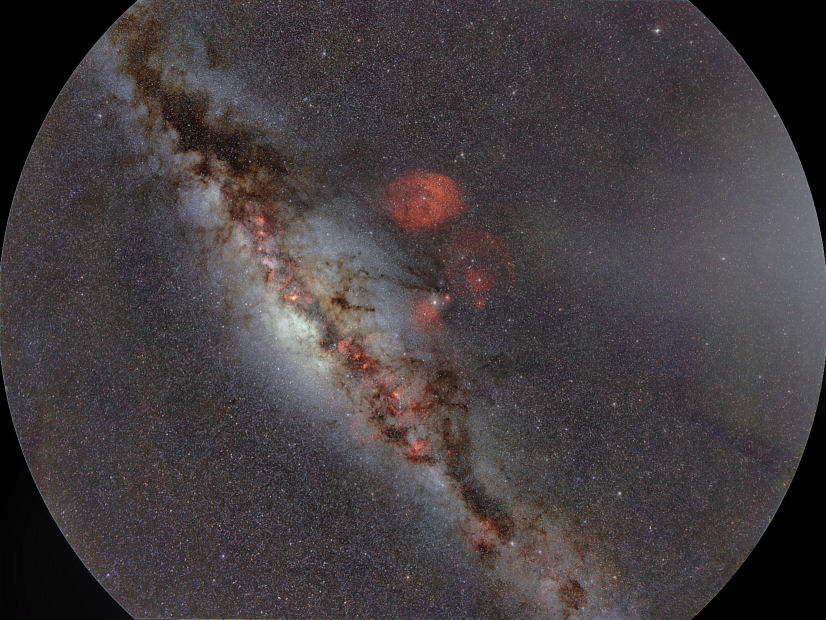