How to polar align in the southern hemisphere

In what follows, I will consider that you wish to polar align a german equatorial mount, equipped with a polar alignment scope allowing to center the pseudo southern polar star Sigma Octantis.

Pseudo because in the best of cases it is barely visible to the naked eye, and the zone is relatively poor in bright stars.

Apart from your scope and mount, the procedure requires a few more accessories : First a pair of binoculars in order to recognize the field before pointing the mount. A good pair of 7x50 or 10x50 is always good to have. Second a green laser pointer. You can find several models but as a professional user, I now only purchase these ones, because they last a lot longer than the smaller AAA battery type ones. It's also nice to have a numerical sky chart, which can be any program on your telephone. Also on the telephone an polar alignment app. I have an iphone, so I use polar scope align pro. This way it gives you the orientation of the sky at the moment of your observation and your latitude.

Polar scopes are usually 15 to at best 30mm diameter telescopes, are relatively uneasy to use (you have to crawl below the mount), and normally it's not so obvious to find the damned sigma octantis with them. Of course it is better to have your polar axis more or less at the latitude of the place, and pointing south. Since these finder scopes are made for the northern hemisphere, where the sky rotates in the wrong direction (not the right direction like in the south :) ), all the settings with dates and time on certain polar alignment scopes are useless. You just have to rely on the orientation of a trapezium of stars in the field. The only decent polar finder is the one of the Astrophysics mounts.

Since the zone is really empty of bright stars, you have to go from one easy to find bright star, and then go in the right direction. The easiest way is using Beta hydrae. This star is magnitude 2.8 just on the side of the small magellanic cloud. It makes an easy to find triangle with the SMC and the globular cluster 47 Tucan which is magnitude 4.

At my latitude this star is circumpolar, even though at moment it can be quite low in the sky.

One need to have a rough idea of where the southern pole is compared to the two Magellanic clouds.

Once you have located Beta Hydrae with the binoculars, if you go toward the south pole, you will find, at about one field, the triplet of Gamma Octantis. There are 3 stars of magnitude 5.1, 5.7 and 5.9 making a small arrow pointing toward Sigma Octantis. Under a dark sky they are barely visible to the naked eye. I don't know why they are all 3 called gamma, instead of having each a given name (gamma,delta and epsilon ?).

Going in the same direction, one field and a half further, one can find the trapezium of stars with Sigma Octantis. 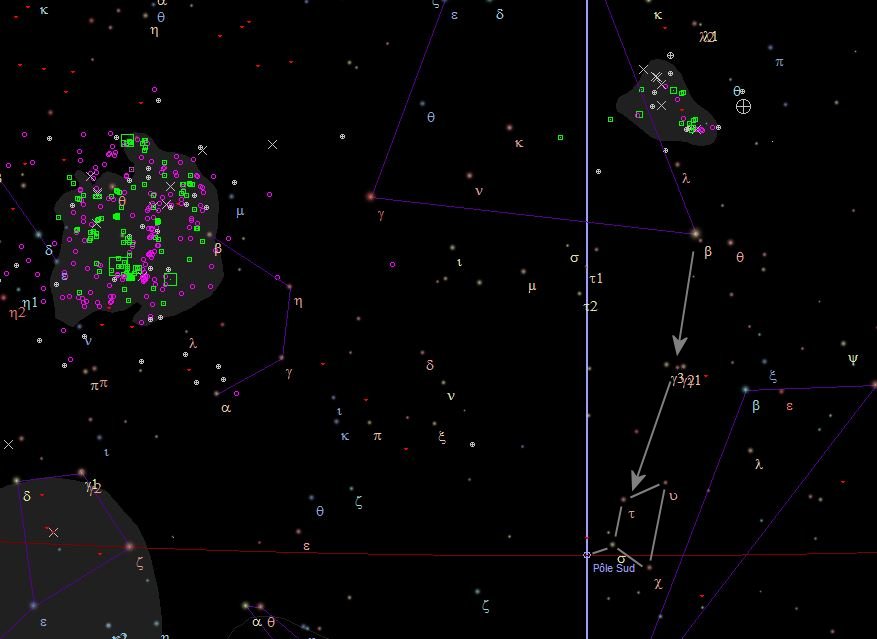 These maps, produced with the PRISM software show the zone. Beta Hydrae, then the Gammas Octantis, then the trapezium. Sigma is the star which has another 2 stars making a small line. On this map, I have marked the trapezium you need to find in white.

I normally look at the zone with binoculars and once I have found the trapezium, I point it with the laser so as to find the general position with the naked eye. Then I place the laser into the polarscope, so that the light comes through and I see roughly my offset compared to the pole. I normally the look with the binoculars and look at where the laser, through the polarscope is aiming. Once aimed close to the zone, I look visually through the finder scope, with Sigma Octantis normally in the field.

Of course, you have to imagine that during the year and the night this map will have a different orientation, and that's why it is better to look at a digital map before to see the current orientation. If Beta Hydrae is not visible, you can of course go from the southern cross, knowing that gamma and alpha of the southern cross "aim" more or less toward the pole, going through Musca, and then Chameleon, but very often, wandering with binoculars, you will find the triangle of Gamma Octantis before Sigma Octantis.

In this picture, taken with a wide angle lens, one can recognize Beta Hydrae a bit above and right from the top of the telescope tube, then the 3 gamma stars, then the polygon with Sigma Octantis. This corresponds in a way to the worst conditions with none of the Magellanic clouds visible. Of course my method works well for my latitude, but at this time of the year, if you go further south, or are in a valley, you might not see Beta Hydrae.

Once the laser, going through the polar scope, points in the right direction, you will normally have sigma octantis and the trapezium of stars in the field of view of the polar finder. Then it's a matter of turning the drawing of the trapezium in the polar scope with the same orientation as the real thing (I normally use a small red flashlight in front of the polar scope in order to see the engraving of the reticle, then off, to see the stars, then move, then see if I'm good or not, move some more, etc...). When done, you are really close enough to the pole so as to be able to make relatively long exposures with a short focal length. 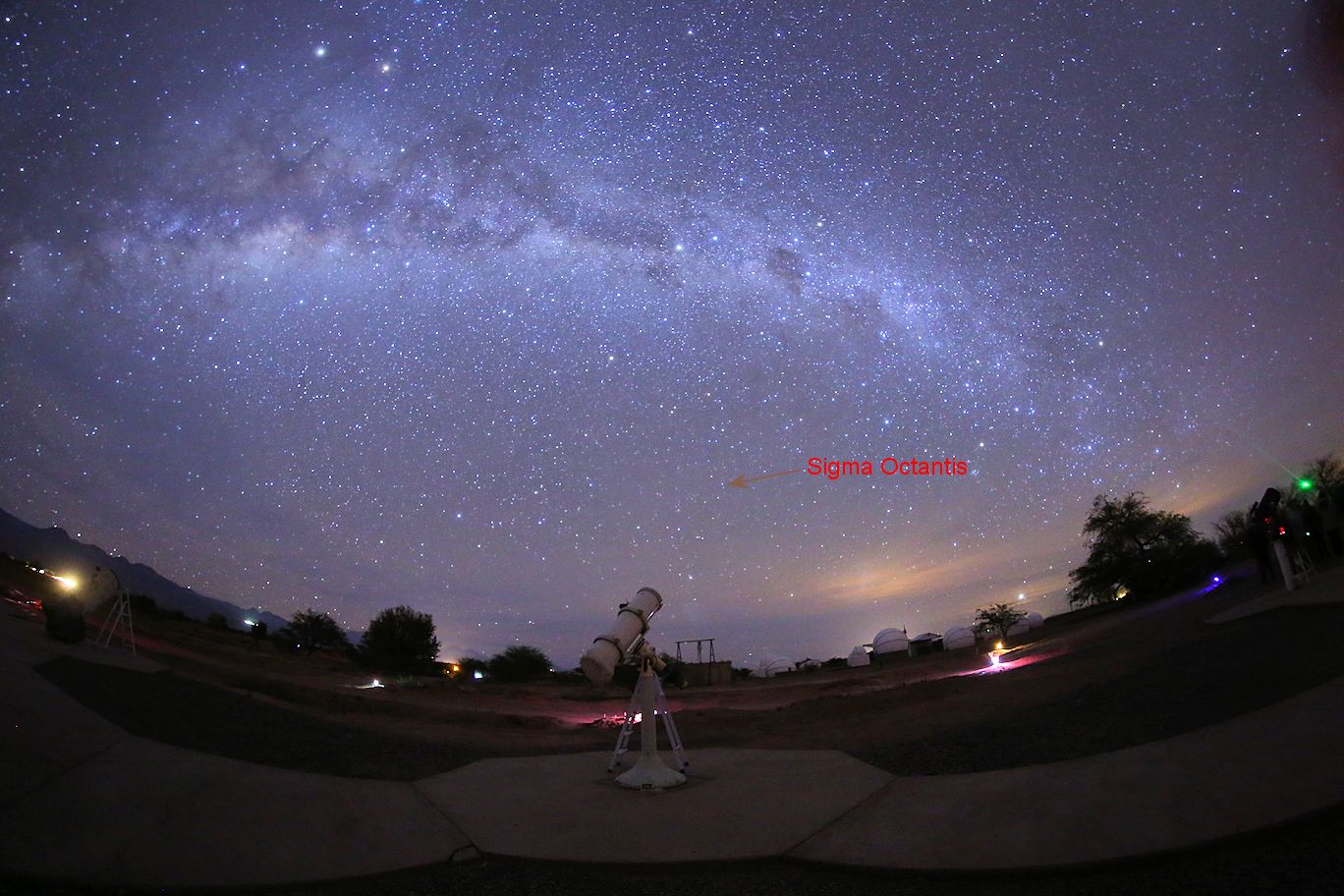 Tweet
Who am I?How to polar align in the southern hemisphereHow he believed he killed Pluto alone, and why it had it coming.Is wild capitalism the best humanity has to offer to the Solar System ? (updated May 30th 2020)NEA stats 2018De la catastérisation à la catastéroïdation...Starlink = Star kill ?La grande conjonction du 21 décembre 2020Pluto festival of disinformationMAPAstrophotos2021 X1RechercheCCDPhotographieImages du cielTextesInstruments