I have kept statistics of near-earth asteroids discoveries since 2002, but in the recent years, I didn’t put them on line, just looked briefly at the data for myself when I had time, or said otherwise, when the weather was poor, which is frequent in January in my region (monsoon season).

As all the other years, I picked up 3 files from the minor planet center at around January 10th 2019 (here, here  and here), removed the many asteroids already discovered in these 10 days, concatenated the 3 files into a large one (Aten, Apollo and Amor asteroids). I then used Excel and Kaleidagraph in order to organize data and create the plots in this page. I have a set of kaleidagraph macros I wrote to produce the files I need.

If you came to this page, I expect you to know the most basic things about these asteroids, among other what is the difference between Aten, Apollo and Amor asteroids.

I used the absolute magnitude derived from these files, which may or may not be precise, I rounded the decimal part of the magnitude i.e. a magnitude 18 object is anything between 17.5 to 18.49. 18.5 is counted as magnitude 19.

I did the best I could, and hope not to have made mistakes (I had some doubts for example about counting some programs as amateurs or professionals). If you detect a problem, contact me on my personal email address.

If I put all the telescopes belonging to the same group together (i.e. Catalina is MPC code W96, 703, I52 and E13), Panstarrs is both F51 and F52, LINEAR are all the groups who reported under the LINEAR name (MPC code is) Spacewatch is both 691 and 291, Palomar is all the groups who observed from Palomar, 675, NEAT, etc… Atlas are both Atlas telescopes together, we get the following table for the first ten discoverers of asteroids :

Amateurs have contributed very little. A grand total of 266 asteroids or 1.4%. In fact, out of the 1839 NEOs discovered in 2018, only were 3 discovered by amateurs (SONEAR observatory in Brazil).

Then ten amateur groups who have discovered most NEOs are (name of the observatory and number of NEOs discovered):

Out of the total of 19630, 13044 NEOs are single opposition, and a vast majority have in fact a very short arc of observation. 9570 have less than a month of observations (about half of the total). It is expected that these asteroids will be “rediscovered” at a following opposition.

The following pages show the evolution of discovery by magnitude range. To convert the magnitude range to an estimate of the possible diameter of the asteroid, please check this page. 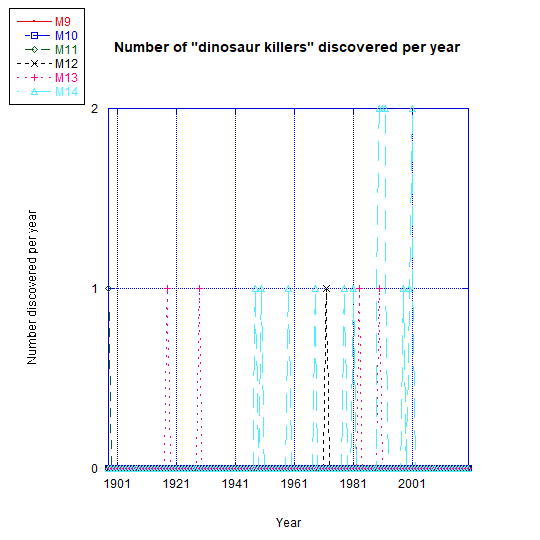 Here is a plot of all the very large NEOs. What journalists would call “dinosaur killers”. As can be seen the last ones were discovered in 2001 (asteroids 68348 and 25916), and even though we have much better detection systems today as 18 years before, we never discovered another one since. The inventory is complete, and it can be said that we will not finish the way of the dinosaurs since none of these asteroids have been found to be dangerous in the near future. Any publication talking about end of the world asteroids, humanity going to disappear like the dinosaurs did is written by somebody who does not have any idea of the reality. This is a problem solved. An impact with a 3km asteroid would certainly not be very good news, but would not lead to the extinction of the human race. Between the largest near earth asteroid (Ganymed, of absolute magnitude 9) and the asteroid brighter than magnitude 14.5, there is a grand total of 23 such asteroids coming close to the orbit of the Earth, but none is going to impact us in the coming century. After that, it will be to the astronomers or the robot astronomers of the future to keep an eye on these asteroids. 23. No more. 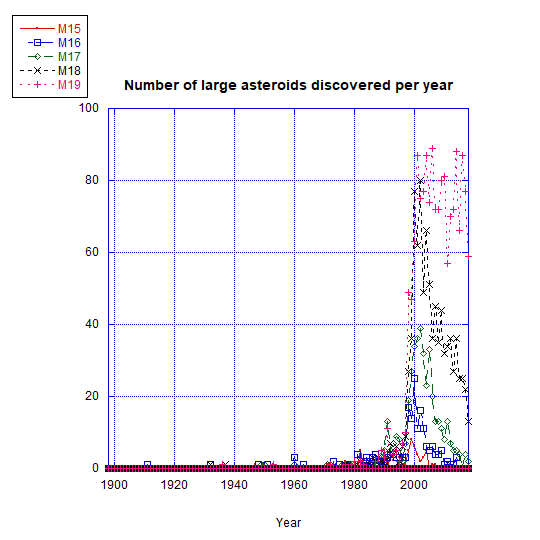 This diagram shows the discovery rate of asteroids between magnitude 14.5 to 19.5 (or more or less between 3km diameter and a third of a km diameter, see here for example). As can be seen most of them were discovered in the last twenty years. So let’s look at the last 20 years. 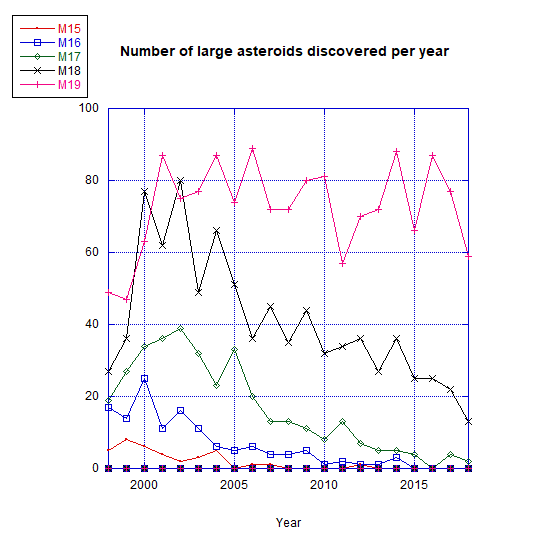 Taken into account that these objects were not really well discovered by the surveys in the past, I only drew this diagram for the last twenty years. Here we can see the progresses made by asteroid surveys. We keep discovering more and more. Even though 2018 does not seem to have been a fantastic year for asteroid discoveries. 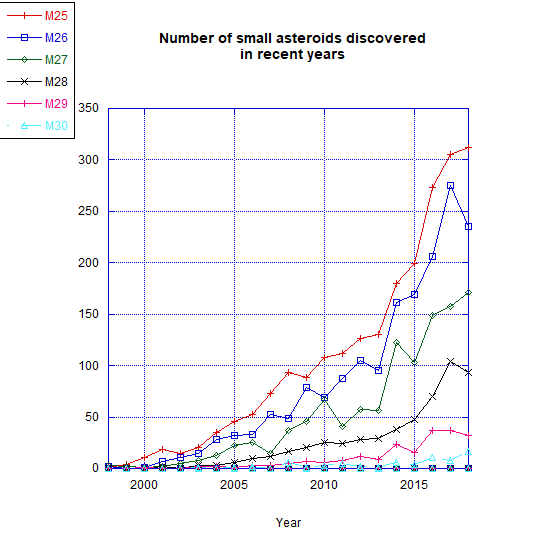 Here we can see that the current surveys are not very efficient at discovering smaller asteroids. Since the distribution of asteroid size is exponential, there are many many more small asteroids than bigger ones. So discovering 300 magnitude 25 asteroids per year means a much smaller proportion of the existing population than discovering the same number of magnitude 24 asteroids. But so far, it’s not too important as most of these asteroids are very small and do not constitute a really big danger. Populated areas in the world do represent about 3% of the total surface (70% is ocean, then Antarctica, deserts, mountains, etc...). A rough calculation says that even though a Toungouska sized asteroid falls on Earth every 300 years or so, it falls on a city every 9000 years, so there is like a 1% probability it would happen during our lifetime. It's much more dangerous to vote for a stupid president who would start wars only to satisfy its military lobby, to continue "respecting religions" and non democratic regimes, spend a grand total of 1.8 trillions of dollars per year in weapons, etc...

Number of asteroids discovered at the end of 2018 versus magnitude class.

I did plot the total number of asteroid per magnitud class discovered in the last 20 years. The lowest curve is how many asteroids we knew in the year 1998 and then year after year, how many were discovered. 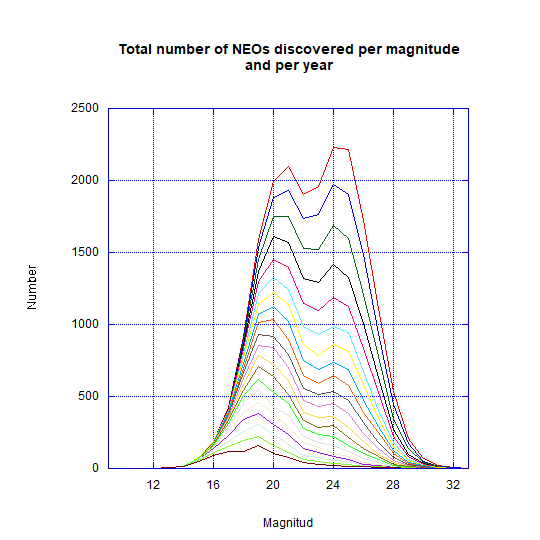 This concludes this short report. Feel free to use any of these diagrams, of course citing your source (i.e. © Alain Maury – S.P.A.C.E. 2019)