Several classes can be described, depending on where their orbit is located in the solar system.
A vast number of them orbit in a large belt located between the orbit of Mars and Jupiter, and are therefore called main belt asteroids.
A similar number orbit on each side of Jupiter, in two great "walls" located 60° of each side of Jupiter (called the trojan asteroids).
Some others orbit further than Neptune (called transneptunian objets). The first of these objects was discovered in 1992. Since they are very distant, they are usually very faint, and are difficult to observe with small telescopes. However, more than 1500 have been discovered now, and it is likely that while not being called the main belt, it is the "real main belt" of asteroids.
There are several asteroids orbiting between Jupiter and Neptune. They are called Centaurs.
Finally, there are many objects orbiting in the inner solar system. Most interesting are the Earth Crossing Asteroids ( or Near Earth Objects, or Near Earth Asteroids, very often discovered as Fast Moving Objects, i.e. the ECA, NEO, NEA, FMO acronyms ). They are divided in 3 class : Aten (orbit inside the Earth's orbit ), Apollo (cross Earth orbit ) and Amor ( come near the Earth, but not quite... ). A real time diagram of the positions of the known NEOs can be found here.
You will be able to find much more informations about asteroids on the pages of the Minor Planet Center, whose page index is here.
The way asteroids are named is explained here. It is important to understand that it takes sometimes a long time to name an asteroid. For a single named asteroid, many, many others have been observed, which eventually will be named.

The OCA Schmidt telescope started operating in 1978 and was closed in early 1999. Some amount of time has been spent specifically on asteroid searches, while some asteroids were discovered randomly while inspecting some plates taken for other programs.

1366 asteroids have been discovered/numbered at Caussols as of September 2020 which places the telescope on the 23rd worldwide rank of asteroids discovery telescope.
The local history could be described as follow :
- The very first asteroids discovered with this telescope were discovered by Koichiro Tomita, a japanese astronomer from Tokyo observatory.
- In the following period ( 1978-1988), plates were regularly taken and visually scanned for asteroids. Usually, very little follow up was done ( a large number of so called "one night stands"), and the measurements were not all very good either. Despite a large effort, few asteroids came out of this period.
- In 1989-1990, very little time was available to observe asteroids. During this period however, the telescope was fitted with an automatic guider and a film holder. Technical Pan 6415 film became the main detector used on the telescope.
- Starting in 1992 a fruitful collaboration between Eric Elst from Brussels Observatory was started. A few films each lunations were taken, sent to Brussels, scanned and reduced there by Eric Elst.
- Starting in 1995, more and more time was taken to test a 2Kx2K CCD camera.
- From the very end of 1996 to March 1999, ODAS, a collaboration between the OCA and the german space agency in Berlin (DLR) used between 50 and 75% of the available observing time on the Schmidt telescope using a homebuilt 2048x2048 pixel CCD camera. To show the difference between OCA alone observations and OCA+DLR observations, ODAS IAU code was 910, whereas data from Caussols taken for the OCA alone (whether photographic or CCD ) is labelled 010. Most of the asteroids discovered with this telescope have been discovered by the ODAS program. The current discstatus of this program ( a monthly message sent by the MPC to the discoverers) lists more than 2200 asteroids which obtained a temporary designation during this program.
- Since then, the telescope has been closed by the observatory, it was not the first telescope closed on this site, not the last one too. Pretty soon, the observatory known formerly as the "Centre d'Etudes et de Recherches en Géodynamique et Astronomie" (CERGA) will be renamed the "Centre d'Etudes en Ruines Technologiques d'Astronomie" (CERTA) most of its former telescopes being already closed.

The distribution in time, since the beginning of the telescope, is the following : 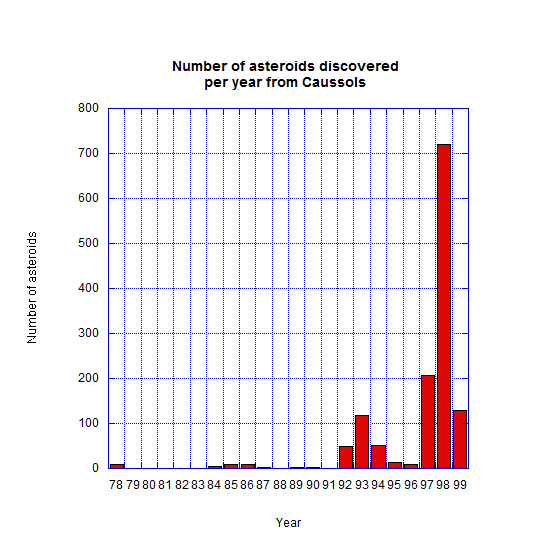 The truth is, in 1978, measuring the position of an asteroid was a painstaking effort, and the telescope was not equipped with a measuring device yet. The first bump corresponds to the fact that the telescope was then easier to use (autoguiding, use of films instead of expensive photographic plates) and the program made in cooperation with Eric Elst in Brussels. Starting in 1994 more observing time was taken by the prototype of the CCD camera (first a 378x512 pixels Thomson chip, then a 2048x2048 chip). 1997 is the beginning of the ODAS program, thanks on the OCA side to Hans Scholl, Albert Bijaoui and José Pacheco (director) and Gerhard Hahn, Stefano Mottola and Gerhard Neukum (DLR director). May 1999 is the arrival of Jacques Colin as director of the observatory, and Claude Froeschlé as vice director. The last observations  were performed in March 1999.

Table of discoveries :
The first column is the asteroid number, when numbered (i.e. after the object has been observed long enough to have a good quality orbit). It can then be baptized, the name is in the second column. The third column is the discovery date. The fourth is the MPC (Minor Planet Circular) number which gives the official orbital elements. The last is the discoverer.

12 Near Earth Asteroids have been discovered at Caussols